Vienna, 24 November 2022 – UBM Development AG recorded further progress in acquisitions during the third quarter and landed a further timber-hybrid development project with over 10,000 sqm of gross floor area in the booming Düsseldorf Medienhafen. The investment market, in contrast, remains in a state of shock paralysis and, at €16.6m, EBT for the first three quarters of 2022 generally reflected the first half-year without significant changes. “The motto for our financially well positioned UBM is that you should never miss a good crisis“, explained UBM CEO Thomas G. Winkler and added: “The first competitors are already in difficulties, and others will certainly follow.“

Solid financial position for the “perfect storm“
In contrast to these companies, UBM further strengthened its solid financial position and even increased liquidity slightly over the first half-year. UBM had over €358m of cash at its disposal and an equity ratio of over 33% as of 30 September. This solid starting base is necessary to have sufficient reserves for adverse developments, but also to take advantage of potential market opportunities.

Sustainable pipeline protects future earnings contributions
UBM’s future profitability is protected by the earnings contributions from the current €2.1 bn pipeline. In the third quarter of 2022, UBM received the zoning permit for the LeopoldQuartier in Vienna. It will become Europe‘s first urban quartier in timber-hybrid construction and sets a clear signal in the interest of sustainability. The projects currently in progress are located primarily in Germany and Austria (90%), respectively in the residential (56%) and office (44%) asset classes. Over 180,000 square metres of timber-hybrid construction are already in progress or in planning.

Outlook
The current situation on the real estate market has also led UBM to pull back from several planned transactions. Further results for the 2022 financial year will be a “photo finish“ because the expected positive effects are not dependent on UBM alone. In the absence of better information and in view of the unclear market situation, UBM confirms the guidance issued at the half-year and remains cautiously optimistic for the coming difficult quarters.

Identification of error by OePR leads to €27m correction to equity
UBM acquired a commercially utilised property as a development project in 2018 and recognised this asset at a fair value of €69.0m as of 31 December 2019. In the second quarter of 2020, 40% was sold to a third party, whereby the transaction and at equity valuation resulted in a new fair value of the property at €141m. A routine audit by the Österreichische Prüfstelle für Rechnungslegung (OePR) identified an error in the annual financial statements for 2020, which indicated that the risk associated with the expected procurement of building rights was not sufficiently reflected in the fair value of the property. The recognised fair value should have been €39m lower, which subsequently influenced the acquisition costs for the initial at equity recognition of the investment and led to a correction of €27m to the equity. The correction of this error has no effect on the consolidated income statement or the consolidated statement of cash flows.

1 Total Output corresponds to the revenue generated by fully consolidated companies and companies consolidated at equity as well as the sale proceeds from share deals in proportion to the stake held by UBM.

3 Earnings per share after the deduction of hybrid capital interest (change in calculation method beginning in 2020); values based on Q1-3.

5 The asset and financial data were adjusted as of 31December 2021 based on an AFREP audit. Additional information is provided in the consolidated interim financial statements.

UBM Development develops real estate for Europe’s metropolitan areas. The strategic focus is on timber construction, green building and smart office in major cities such as Vienna, Munich, Frankfurt or Prague. A Platinum rating from EcoVadis and Prime Status from ISS ESG confirm the consequent focus on sustainability. With close to 150 years of experience, UBM offers all development services from a single source, from planning to marketing. The shares are listed on the Prime Market of the Vienna Stock Exchange, the segment with the highest transparency requirements 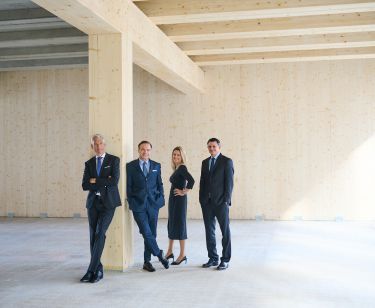